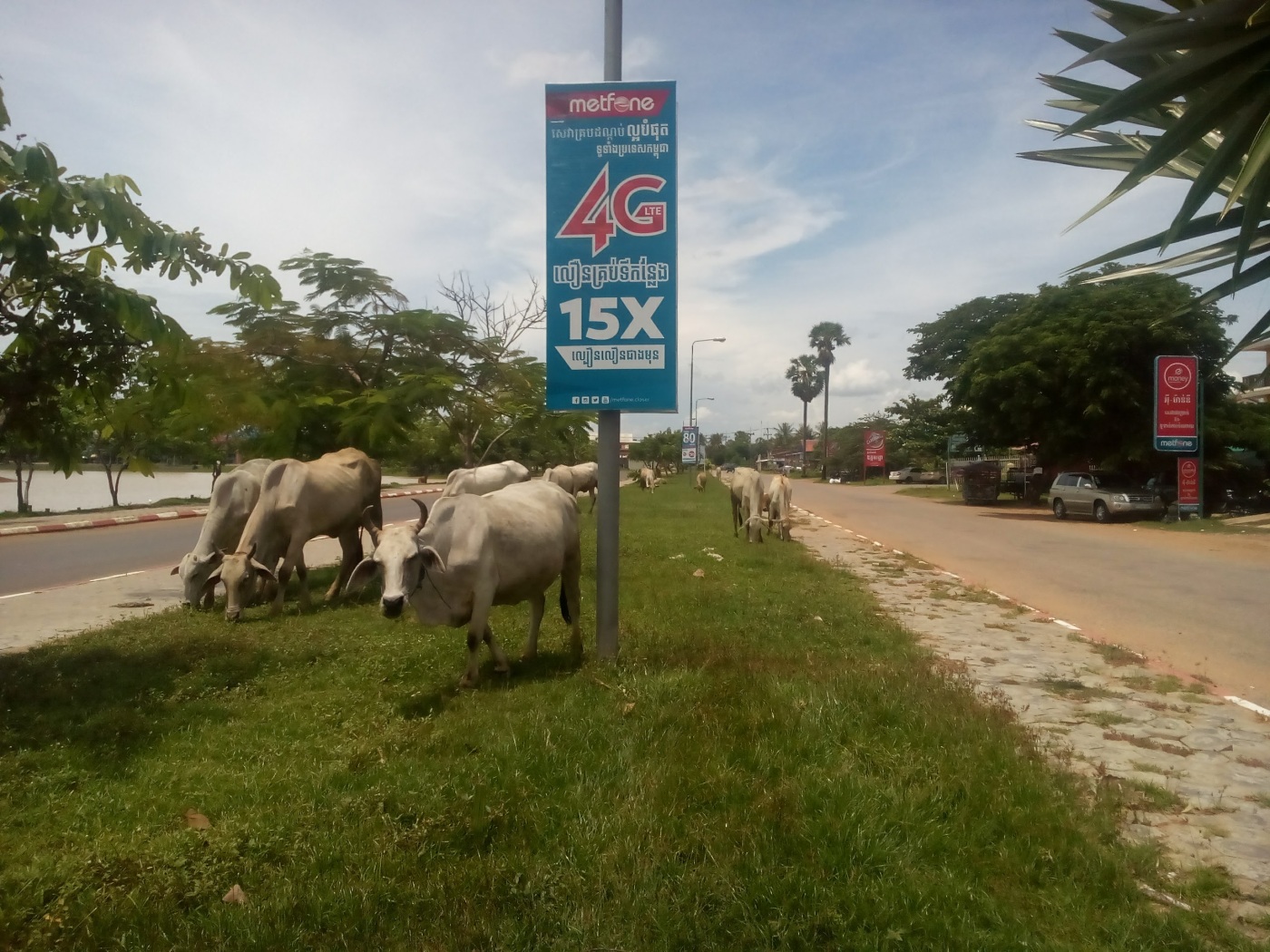 After almost seven weeks of spending every day inside my own head, struggling over mountains, riding across rice fields, and facing down creepy men… would I even be able to readapt to society?

Preoccupied with thoughts of my uncertain future, I headed into the final days and the road back to Battambang. But before my glorious return, I still had one more exciting secret Cambodian tourist spot to visit, and just a few more rural towns to navigate.

Really, anything could happen.

Leaving Preah Vihear, stoked after my visit to that incredible temple, I cycled out towards Samroang. It was a mere 80km from Sra’em to Samroang, the capital of Oddar Meanchey, one of the least visited and least populous provinces in Cambodia. 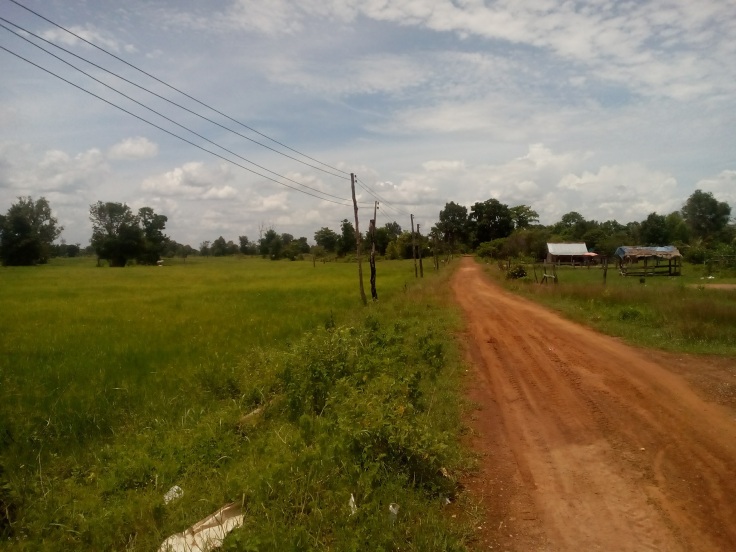 Honestly, by this point in the ride I was getting downright arrogant. 80km was nothing, I’d bang it out in a few hours with plenty of time to spare for exploring Samroang.

But just when you think your bike tour has nothing left to teach you, the bike schools you once again. I found myself cycling into a steady headwind for 80km, a totally challenge to my mindset that forced me to reevaluate my presumed strength. Determined to enjoy the final days of my ride, I had to mindfully try not to feel negative. Yes, the headwind was frustrating but really, how lucky was I?

The road from Sra’em to Samroang is technically a highway, but it is little used. Aside from a few trucks, cars, and entire families on motos, I pretty much had the road to myself.

Even with the headwind, I made it to Samroang around lunchtime and found an overpriced room in a underwhelming guesthouse. Samroang itself was a very strange town. The provincial capital, it has the grid of roads laid out for a town, with plenty of government buildings… but no town. The streets are there, but the people are not. They all live in villages nearby, but not in the town itself. Its as if the government wanted to build a town there, but the people didn’t feeling like settling.

If you build it… they’ll tell you to get lost.

It was pretty weird.

From Samroang, it was a simple 50km out to Banteay Chhmar. I’ll be honest, it wasn’t the most inspiring or beautiful section of the trip. 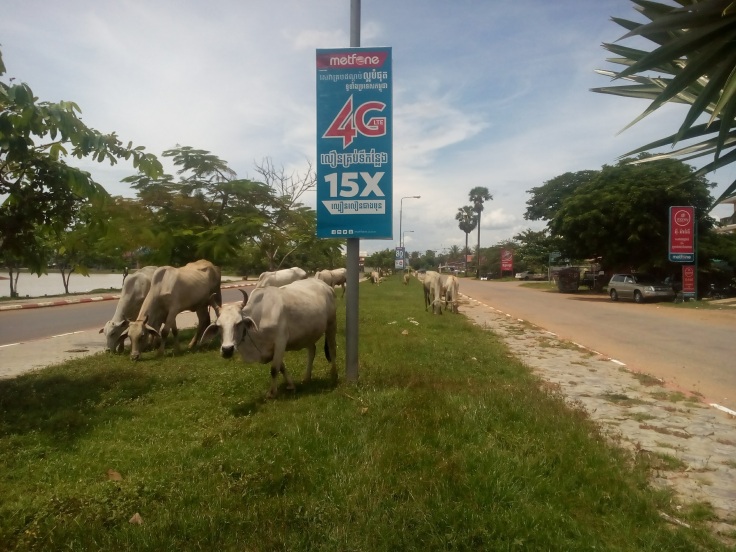 The road was mostly flat, I think, not super memorable, except for one section that wound through some lotus flower fields. Those are always a treat.

Arrived at Banteay Chhmar, site of an ancient Angkor Era temple in a state of disarray. This temple is equal in size and beauty to many of the temples outside of Siem Reap, but far less visited by tourists. 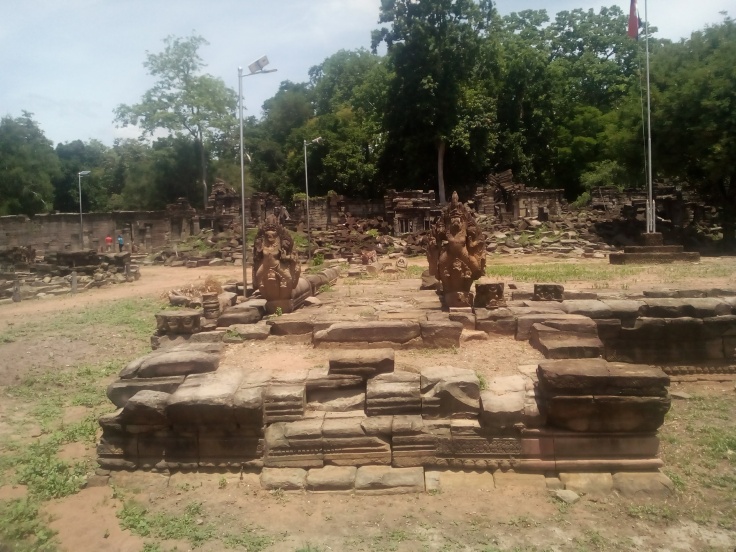 The village surrounding the temple runs a CBT, or “community based tourism” initiative. What this basically means is that the money from the temples, one restaurant, and the homestays in the village are all pooled and go directly back to the locals. The result is that the tourism around Banteay Chhmar actually benefits the people who live there. Weird, right?

I arrived in town with the idea of spending a night in one of the homestays in the village. However, I failed to call ahead and when I popped into the CBT office, it was empty. It was 11am though, so I went to visit the temples, have lunch, and then made up my mind to continue riding all the way to Sereysophorn, another 60km. No homestay for me.

Can I tell you a secret?

I hate homestays. I’m not opposed to them from an ethical standpoint, I’m sure they can be great for responsible tourism. But just from a personal standpoint, I hate them. I feel so awkward and intrusive. Skipping the homestay in Banteay Chhmar was an easy call. I much prefer a simple guesthouse.

The ride from Banteay Chhmar to Sereysophorn absolutely flew by. I had just a hint of a tail wind, my legs felt strong, and I was in a euphoric state of mind. This was my last section of never-before-seen road on my bike ride around Cambodia. It was characterized by wide open rice fields. The storm clouds looming overhead only encouraged me to ride harder.

It was one of the best afternoons of riding in my trip. Just plain fun.

I arrived in Sereysophorn in the late afternoon, got some deep fried bananas, and took a room in a guesthouse. Tomorrow would be the final day of my trip. Just a quick 70km down Road 5. A route I’d ridden before, two months ago when I was training for this ride.

It was certainly a bittersweet feeling.

This was it. The final day. A day which, if I’m being totally honest, I’d been imagining since before I even began the ride. Is that strange? I don’t think so. Sometimes I imagined myself rolling into Battambang completely exhausted, worn out, and just falling off my bike in the street.

Other times, I imagined cheering crowds. Women fainting. People running up to congratulate me.

Okay, those are my Tour de France fantasies. Whatever. 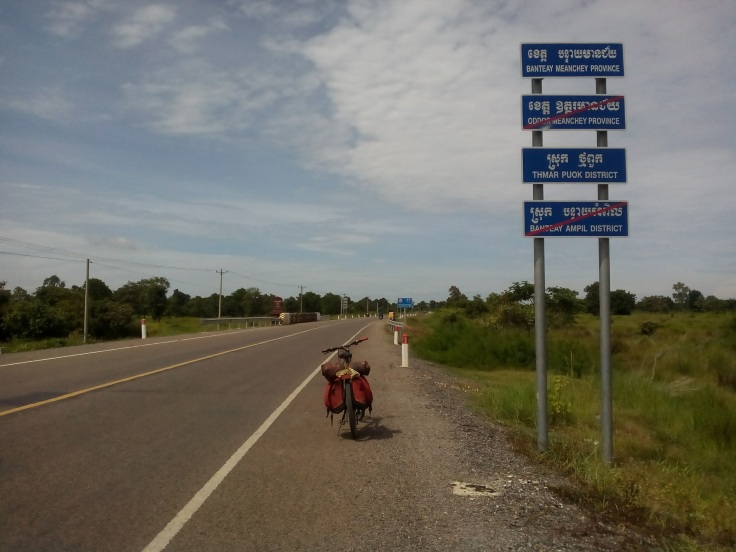 The final day of the ride was great. I mean, road 5 is a crowded highway, so that wasn’t exactly enjoyable. I was really struck by the extreme contrast between Oddar Meanchey, Banteay Meanchey, and now Battambang Province. Just yesterday I’d been riding through underdeveloped land and open rice fields, hardly a town to be seen. Now the road was crowded with trucks, buses, vans, and cars, and the sides of the road were lined with houses, shops, and larger businesses. Night and day.

But it was familiar, it really felt like “this is the end”. But in a good way. It was nice to return to Battambang and have it feel like home.

I even passed another bike tourist. We waved at each other, no words were exchanged. 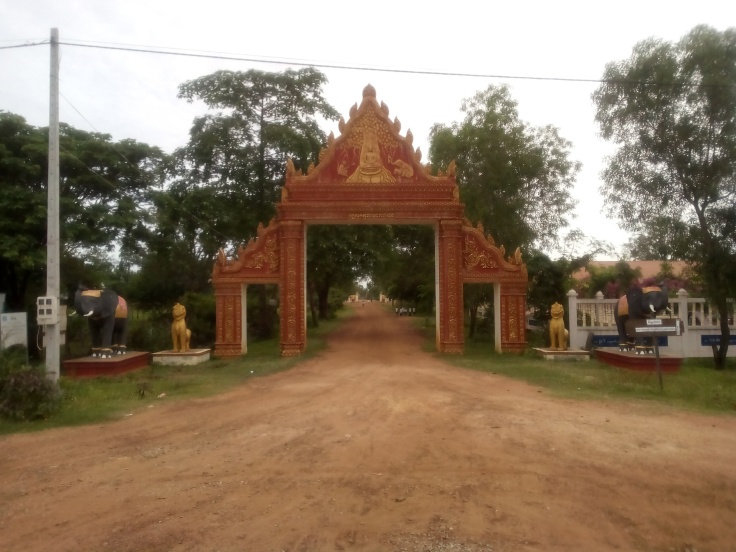 I rolled into town before 11am. The cheering crowds didn’t materialize. It was no different than the end of any other day. No one batted an eye, except for the one or two creepy guys who chose to leer at me.

Final Thoughts from a Bicycle Tour Around Cambodia

In the moment of my arrival in Battambang, I realized that the deeply personal life journey I had just been on would remain just that: deeply personal. In truth, even as I write this blog post, two weeks after the end of the ride, I’m still digesting everything that the ride meant to me. It was such an incredible and life changing experience. I feel something has shifted, down at the very core of my being.

It was a realigning. A readjustment. A reset.

Even as I arrived back in Battambang on that last day, I felt it. I was a happier, more lighthearted person now than when I had left.

When my friend who runs the “Cafe Eden” in town came out onto the street and said “You’re Back!” and I laughingly replied “Yes, literally just right now.” I felt that I was a changed person. Even if no one else could see it, I knew at the core of my being that something had been deeply altered.

The Megan who had ridden out of Battambang on May 1 was weighed down by expectations, self loathing, and hateful criticism.

The Megan who returned was different. Happier, lighter, more forgiving of herself, content with herself, confident. Overjoyed.

I had just ridden 2,145km around Cambodia. And I felt fucking amazing. 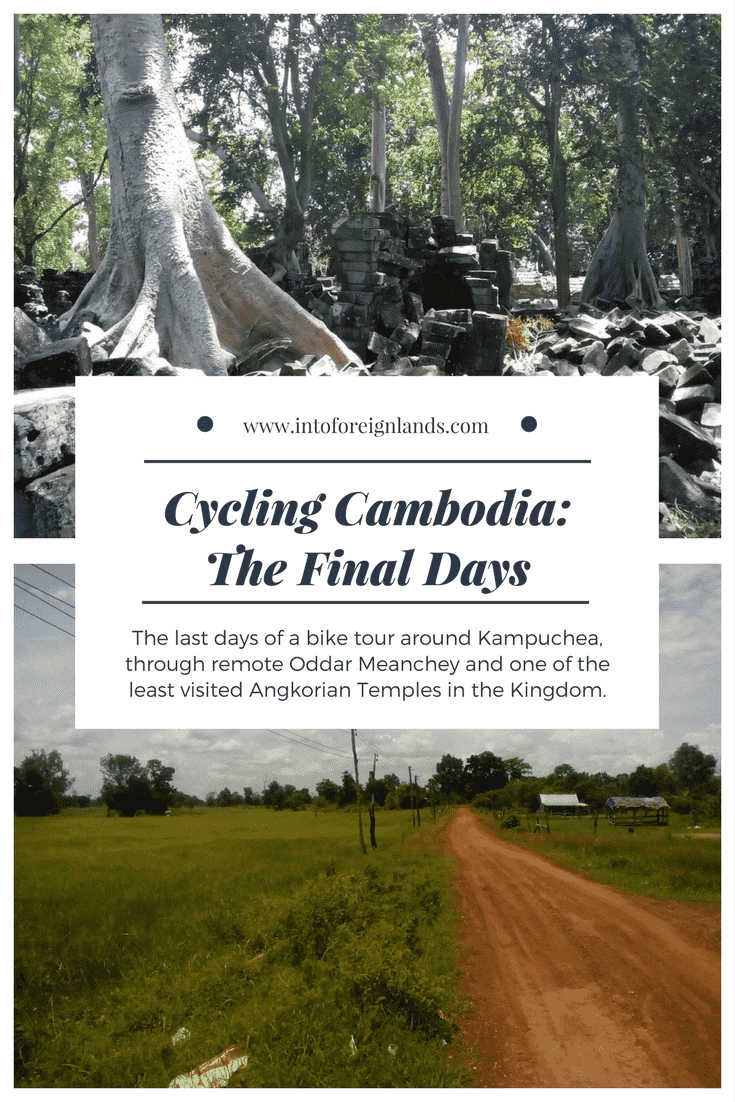